Our oldest daughter is a Freshman in high school, and our conversations over the past few weeks have really opened my eyes to the struggles our children are facing. There is a new epidemic that is taking the lives of our youth, and it’s time to do something about it. CYBERBULLYING is bullying that takes place using technology. Catherine has a friend that is experiencing it, and it is affecting everyone she knows. She is withdrawing from her peers, depressed, wants to move to another school and is clinging to others who are experiencing the same.  Just last week there was a student from Alamo Heights that took his own life after a group text went out berating his appearance. It was the final straw for him as he had been dealing with these bullies for months. His story has become national news with his brother taking a stand to help stop it from happening to others. I want to help him in reaching many with the message that our words have the power to GIVE LIFE or BRING DEATH.

These are some of the words shared on Facebook by David Molak’s brother, “In today’s age, bullies don’t push you into lockers, they don’t tell their victims to meet them behind the school’s dumpster after class, they cower behind user names and fake profiles from miles away constantly berating and abusing good, innocent people,” the post said, adding that that’s exactly how the final night of David Molak’s life played out. David was 16 years old (pictured far left with his brothers and mom).  Such a tragedy that could be prevented if we understood the magnitude of our words.
“The tongue has the power of life and death, and those who love it will eat its fruit.”
Proverbs 18:21

“With his mouth the godless destroys his neighbor, but through knowledge the righteous escape.”
Proverbs 11:9

“A gossip betrays a confidence, but a trustworthy man keeps a secret.”
Proverbs 11:13

“There are six things the Lord hates, seven that are detestable to Him: haughty eyes, a lying tongue, hands that shed innocent blood, a heart that devises wicked schemes, feet that are quick to rush into evil, a false witness who pours out lies and a man who stirs up dissension among brothers.”
Proverbs 6:16-17

“The tongue is a small part of the body, but it makes great boasts. Consider what a great forest is set on fire by a small spark. The tongue also is a fire, a world of evil among the parts of the body.”
James 3:5-6
From the footnote of James 3:6 in the NIV Study Bible: James compares the damage the tongue can do to a raging fire–the tongue’s wickedness has its source in hell itself. The uncontrolled tongue can do terrible damage. Satan uses the tongue to divide people and pit them against one another. Idle and hateful words are damaging because they spread destruction quickly, and no one can stop the results once they are spoken. We dare not be careless with what we say, thinking we can apologize later, because even if we do, the scars remain. A few words spoken in anger can destroy a relationship that took years to build. Before you speak, remember that words are like fire-you can neither control nor reverse the damage they can do. 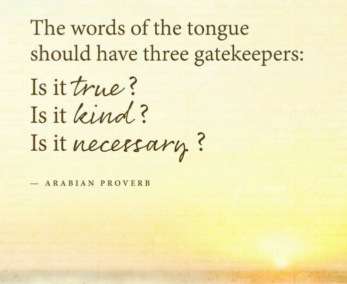 You guys…THIS IS A BIG DEAL! We have to use caution before speaking. We have to stop being a part of using words to tear down others. We’ve all heard our mom’s tell us, “If you don’t have something nice to say then don’t say it at all.” These words are full of WISDOM. We should listen to it and put it into practice. We should speak LIFE! We are ALL created in His image. He loves us ALL. We should be for each other not against each other.

Here’s a challenge for all of us…when we hear someone speaking negative against someone else refuse to participate, redirect the conversation and speak LIFE to them. Most of the time it is in their own insecurity that causes them to speak against another. They think it will make them feel better about themselves. It’s not true. It will leave them feeling more empty and the hurt will continue.  Speak LIFE! Speak LIFE!!! 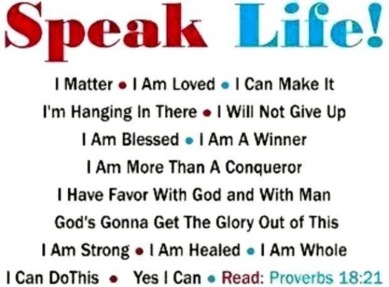 If you are experiencing the hurt and pain from words spoken against you, I have encouraging words for you. YOU ARE LOVED! YOU ARE VALUABLE! Do NOT listen to the lies. Proverbs 11:9 above tells you that through knowledge the righteous escape.  You are His RIGHTEOUS child!  You have the knowledge of truth to see you through it all. If you are feeling as if this life would be better off without you, get help! That is the enemy lying to you. Write this verse down, memorize it and recall it often: “For I am convinced that neither death nor life, neither angels nor demons, neither the present nor the future, nor any powers, neither height nor depth, nor anything else in all creation, will be able to separate you from the love of God that is in Christ Jesus our Lord.” Romans 8:38-39

He fiercely LOVES you and there is nothing that can separate you from His LOVE!
#truth #gloryup

4 thoughts on “The Power of Words”