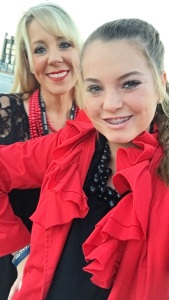 “Red Out” Day at BHS

This week is significant to all of us, it’s Red Ribbon Week! Schools across the nation are campaigning to teach our children about the importance of saying “NO” to drugs. Most of them have clever and witty dress up themes to engage the students in participating. Our family has enjoyed joining in on the fun, but if we are not careful the week will pass by with the student’s only remembering their favorite theme day. It’s so much more than that…it’s about getting the facts about drugs and learning the truth verses the terrible lies that are robbing and stealing from our youth and even our adults. Did you know the most effective weapon in the war on drugs is EDUCATION? Let’s get to learning about them and sharing the message to: LIVE a drug-free life.

Our precious School Nurse is passionate about getting the message out and rallied our drum line this week to march with her down the halls to make a loud noise AGAINST drugs. Posters fill the hallways with testimonies from real students that tried it and know first hand the damage that it causes. My heart was moved to go visit her and see how I could help in sharing the truth. She gave me a folder full of statistics and pamphlets from the Drug Free World Organization. Here are some excerpts from “The Truth About DRUGS Activities Manual.”

“According to the United Nations Office on Drugs and Crime 2008 World Drug Report, an estimated 208 million people, or nearly 5 percent of the world’s population between the ages of 15 and 64, consume illegal drugs. This is an increase of 23 million drug users over 2004. Abuse of alcohol and illicit drugs cost society an estimated $276 billion annually. Substance abusers incur 300 percent higher medical costs than non-abusers. They are one-third less productive on the job and are 2.5 times more likely to be absent from work eight or more days a year. The most disturbing aspect of this problem is how drug abuse damages our youth and the threat this poses for the future of EVERY country. Young users suffer more illness, miss more days of school and are more prone to engage in criminal conduct.”

Even our local businesses have joined in the fight. Lexi and her Uncle, Dr. Tyler Ferris are Super Heroes against drugs!

So why do people take drugs and what drugs are they taking? Here is what our youth are telling us. They do drugs to fit in, to escape or relax, to relieve boredom, to seem grown-up, to rebel, to experiment. They think drugs are a solution but as we know drugs become the problem. SCARY!!!

Are you ready for this? The most commonly USED and ABUSED drug in the US is ALCOHOL. Alcohol related motor accidents are the second leading cause of teen death in the United States. The SECOND LEADING cause…you guys, this drug is stealing lives from us…innocent ones too. Drunk driving KILLS.

The most commonly used illegal drug is marijuana. 3.9% of the world’s population between the ages of 15 and 64 abuse marijuana, and this statistic was before COLORADO made it legal in their state. SCARY!

“DREAM BIG for your FUTURE” and JUST say NO to DRUGS!!!

These statistics are astounding, they really are, but the biggest impact made this week came from one of my oldest daughter’s teacher. It was supposed to be Spanish class where she learned about the new language she is being introduced to but this week the teacher paused to share about one of her former students. Tears came streaming down her face as she told it and before the end of the story over half the class was in tears too. The student had just come to her on a Friday before the bell rang for the weekend. He was overjoyed to learn that he had passed her test and was now passing her class…she remembers high-fiving him and telling him how proud she was of him. She never saw him again. His father found him that weekend after trying a new drug and overdosing. Her classroom had an empty seat. The graduating class lost one of their classmates, parents lost their son, friends had a piece of their heart taken from them all because of a stupid drug.

Friends, we have to speak truth into the lives of our youth. We can not be afraid to share with them the reality of the consequences of participating in alcohol and drugs. It causes so much more than death, it causes broken marriages, relationships and destruction is left in the wake. People are delivering babies into this world after they abuse drugs with the baby in the womb. The children are left with a life they didn’t choose and many of them have out of control behavior problems and learning disabilities.  Grandparents are raising these babies the best they can while their son or daughter sit in a prison cell. It absolutely breaks my heart and it breaks the heart of our LOVING Father! He wants SO MUCH MORE for all of us. I love the words Peter speaks, “BELOVED, I urge you as sojourners and exiles to ABSTAIN from the passions of the flesh, which wage war against your soul.” 1 Peter 2:11

Yes, there is a war being waged against us! We have the power to say NO to it and live the life of abundance that is promised. The apostle John leaves us with this truth, “For everything in the world – the cravings of sinful man, the lust of his eyes and the boasting of what he has and does – comes not from the Father but from the world. The world and its desires pass away, but the man who does the will of God lives forever.” 1 John 2:16-17

3 thoughts on “Get the FACTS!”