On Sunday, we had to take three different routes to get to church. The downpour made it hard to see in front of us even with the wipers on full speed. Even when we took the detours we drove through flooding and high waters. It would have been easy to turn around and go home. I’m so glad we didn’t because the message I heard was a powerful one. 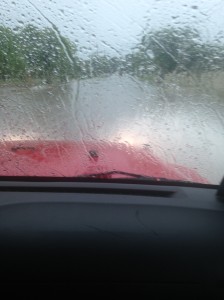 We walk by sight not by faith. Wait. Don’t you mean we walk by faith not by sight? Let those statements sink in for a minute. Which one are you? Do you have to see to believe?

I would like to say that I walk by faith all of the time but honestly that would not be the full truth. Sometimes, I need to see to believe. Even the disciples who walked with Jesus on a daily basis struggled to believe. Seriously think about all of the miracles they saw him perform day in and day out. Blind men were healed to see, lame were made to walk, demons were driven out into pigs, water was turned into wine, feeding 5,000 with only 5 loaves and 2 fish yet the disciples struggled in their faith. If you turn to Mark 6:45-52 you see a true account of this struggle.

“Immediately Jesus made his disciples get into the boat and go on ahead of him to Bethsaida, while he dismissed the crowd. After leaving them, he went up on a mountainside to pray. When evening came, the boat was in the middle of the lake, and he was alone on land. He saw the disciples straining at the oars, because the wind was against them. About the fourth watch of the night he went out to them, walking on the lake. He was about to pass by them, but when they saw him walking on the lake, they thought he was a ghost. They cried out, because they all saw him and were terrified.
Immediately he spoke to them and said, “Take courage! It is I. Don’t be afraid.” Then he climbed into the boat with them, and the wind died down. They were completely amazed, for they had not understood about the loaves; their hearts were hardened.”

This passage took place right after they had fed the 5,000. A true miracle had taken place. Jesus MADE them get into a boat. He retreated to the mountain to reconnect with His Father. Jesus SAW his friends struggling, the wind was against them. He went to them and purposely was going to pass them by while walking on the water. He wanted them to SEE this miracle because they had missed understanding about the loaves, their hearts had hardened but even when they saw him they were in disbelief. They thought he was a ghost. They were scared. They were living by SIGHT.

Sweet friends, we are guilty of living this way too.  When the going gets tough we start to think that it’s because of something that we did or didn’t do. This is good to wrestle with because often our choices that we make can lead to chaos and hard living, BUT sometimes we have difficulty because we are right where we are supposed to be.

We believe in the myth that being in the center of God’s will means there is peace, comfort and joy at all times. If we could just be in God’s will then everything would be easy and we will be happy. You guys, the disciples were right where Jesus wanted them to be. He MADE them get into the boat YET they were struggling.  The wind was against them. Sometimes being in His will means we will struggle. We’re not promised a world without trouble, in fact we are promised that we will have trouble.

“I have told you these things, so that in me you may have peace. In this world you will have trouble. But take heart! I have overcome the world.”
John 16:33

I love that He has overcome the world. I love that He SEES us when we struggle just like He saw the disciples.  I love that He comes to pass us by so we can SEE the miracle of Him doing only what He can do. He walks on water! He calms the seas! He gets in the boat with us. He tells us not to be afraid! He has grace upon grace for us even when we miss the miracles, He will continue to show Himself to be faithful.

My Ryan in his happy place!

So if your walking and straining against the wind, look up and SEE Him. Don’t miss the miracle. It’s when we call upon Him to be our rescue that we find our peace, comfort and joy!

Enjoy taking a listen to one of my favorite songs! Be blessed on your journey and walk by FAITH not by sight!

4 thoughts on “Walk by Faith Not by Sight”